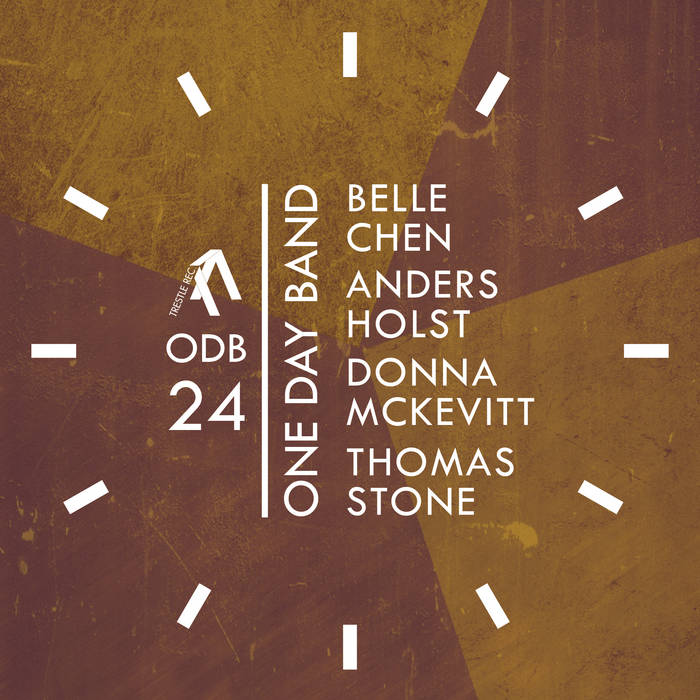 Our first presentation of 2021, One Day Band 24 is a session of poise and tactile precision. A complete presence and informal knowing that the collective energy is moving toward considered placement of each and every sound. The session took place at Holy Mountain Studio, London. Reflecting the time, place and ambience of each of the very special following collaborators, this is an audio document of empathy and progressive soundscaping.

A classically trained pianist, Belle Chen's music is a curious blend of classical, avant-garde, world, electronica, and sound art genres. Her approach to music is unpredictable, often bringing to the audience an element of surprise, yet she retains the tonal aesthetic of classical and neo-classical language in midst of textures drawn from experimental, avant-garde, and world genres. Chen first gained attention in UK's art music scene with her self-released EP 'Listen, London' in 2014, in which she juxtaposed classical repertoire with field recordings taken around London. Self-released albums Mediterranean Sounds (2016), Mademoiselle (2017), Departure (2019) followed - each with a distinct artistic vision - and earning Chen plaudits from industry heavyweights including Brian Eno ("original and provocative"), James Rhodes ("hugely impressive"), Max Reinhardt ("a revelation"), and BBC Radio 3 (Top 4 Best New Music of 2016 BBC Introducing).

Anders Holst is a Danish guitarist/composer, who is continuously looking to explore the means of expression through sound, and seeking to disclose the many sonic and textural possibilities that his instrument holds. His music is informed by reflections on the finds of his musical radar, which pans all around the world and is looking both back and ahead in time, and an equal devotion to improvisation and structure. He has released music in his own name on labels blackout music and scissor tail records and on Rillbar with his alter ego shadow ray. Besides, he is part of collaborations such as bog bodies (mir), Anders Holst & Yann Coppier (clang records) and Cirklen. He has played many acclaimed venues in Denmark and internationally.

Donna McKevitt writes music for film and contemporary dance and music for concert. She likes to mess around with sounds, deconstructing them and combining them with acoustic instruments. She also writes for choral groups and chamber ensembles. From time to time she releases her personal work in the form of an EP. Donna started out in the band Miranda Sex Garden and collaborated with artists like Nick Cave, Tricky and Michael Nyman. Her first work was Translucence a song cycle of Derek Jarman’s poetry which she began when scoring music for his final film Blue. Translucence went on to be recorded and released on Warner Classics receiving five star reviews in all the Classical publications and National newspapers. Donna lived in Sarajevo in the early 2000s where she played viola in the Sarajevo Philharmonic. The new EP Sail and the film A Song Still Inside will also be released in 2020.

Thomas Stone is an electroacoustic composer and musician from London. His practice focuses on live performance, reconciling disparate influences such as his tinnitus, physical endurance, false memories, the physical effect of sound, victorian séance, bass music and 20th century composition. Refined through presentation in various resonant spaces (from churches to a disused water tank, Cornish coastal caves to the hull of a ship) his compositions use contrabassoon and sampling devices as oscillators for his snare drum. Blurring the boundaries between acoustic and electronic sound sources, his post-classical / post-techno soundscapes use the relatively ugly means of long tones, dissonances and cyclic rhythms to reach moments of austere, fragile beauty. Thomas has performed throughout the UK including shows at Tate Britain, The Whitechapel Gallery, The Serpentine Gallery and BBC Radio 3.