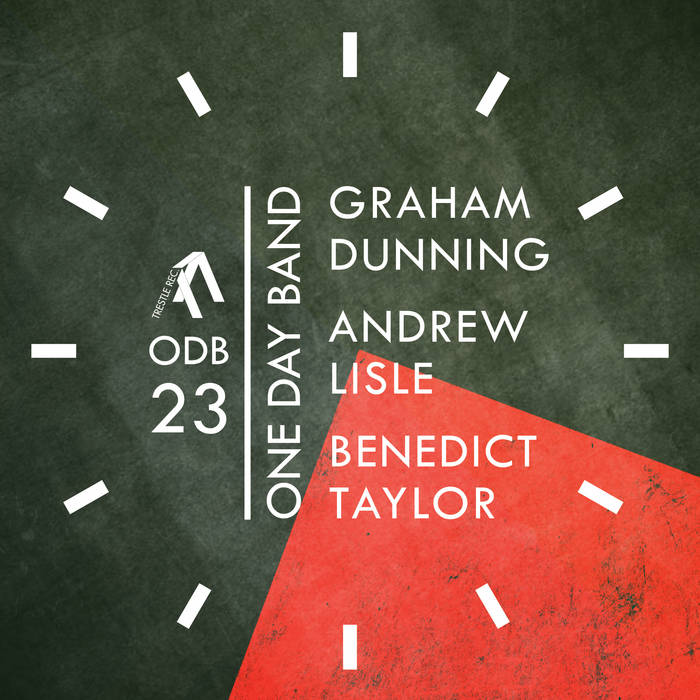 Through friendship and shared involvement in the wider improvised music world, Graham Dunning, Andrew Lisle and Benedict Taylor had known each other for many years, though seldom worked together, and not had the chance to work as a featured small group, or ever play in this particular line up.

'As with the title and nature of the project - One Day Band - it was important to search for the potential newness, unpredictability, spontaneity and crucially challenge of a new group, formed in one day! Due to Trestle Records giving the liberty they did through the platform offered to us, it seemed most natural to jump off the veritable trampoline of freedom given, into a free improvisation as we would a live improvised music performance - the studio as approached as a performance setting if you will - making music with live/performance energy, come what may, with no directive and revision. Rather, all three members of the group responding to each other in real time, and are equally responsible for the shared outcome.' - Benedict Taylor

Andrew Lisle is a drummer working in the field of jazz and improvised music. He strives to create music within the avant-garde, pushing the limits of what is possible on the drums (technically and musically) while drawing influence from the jazz tradition. Since moving to London in 2013 his virtuosity and musicality has established him as a sought-after drummer on the Jazz and improvised music scene, performing and recording with some of the most innovative musicians in the UK and beyond. These include Colin Webster, John Edwards, John Dikeman, Alex Ward, Dirk Serries, Alan Wilkinson, Matthew Bourne, Rachel Musson and Mark Sanders. Some notable venues and festivals he has performed at include: Cafe OTO, Vortex, The Barbican, Jazz at the Lescar, Paradox (Tilburg), Parrazar (Bruge), Love Supreme Festival, and Incubate Festival.

Benedict Taylor is a solo violist, violinist & composer. He is an active figure within the area of improvised & contemporary music, throughout the UK, EU, North America and Asia.

He has been involved with a number of higher education institutions, giving lectures in performance, improvisation & composition at the Royal College of Music, City University of London, Goldsmiths University of London, York University, Royal Holloway College London. He is the founder of CRAM - a music collective and occasional label dedicated to the promotion and programming of improvised music.

Mixed and Mastered by Nick Siddall