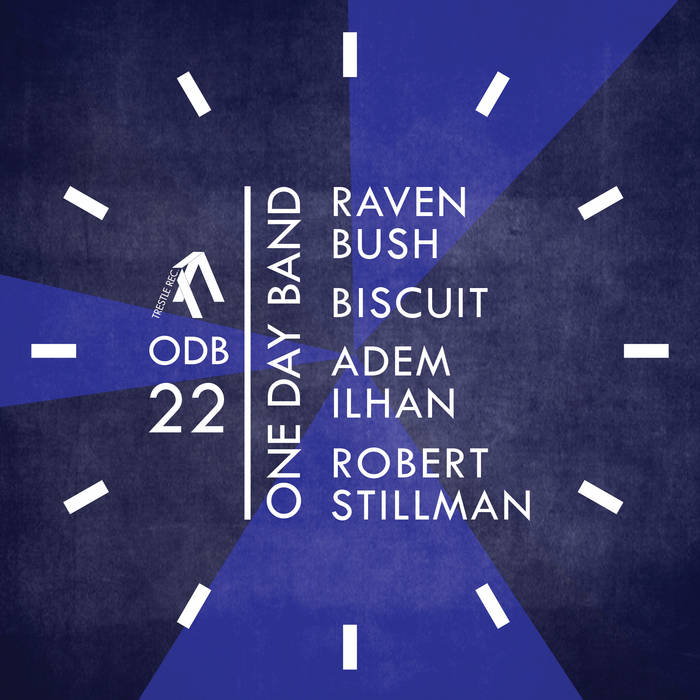 One Day Band 22 was recorded in the seaside town of Ramsgate with Bush, Ilhan and Stillman all local to the area with Biscuit making the journey from the West country to complete the line up. The spacious studio surrounding of Big Jelly was used to judicious effect with the session quickly charting contemporary experimental orchestral passages. Reed and string resonances floated in the high celling studio vaults whilst pitched percussion delivered more intimate avant garde ambience. The overall edit highlights a Musique concrète feel that goes along way to conveying the playful yet considered approach of the boundless musical configurations that the day revealed.


London via Margate composer, producer and multi instrumentalist Raven Bush has collaborated with many well-respected artists including Kate Tempest, Paul Weller, Mica Levi, Kwes and Bullion. His music upholds a balance between the orchestral and electronic, abstract and conventional. Raven is also a member of Syd Arthur.


Known predominantly as a member of the Speakers Corner Quartet, Biscuit (Ross Harris) is a Flautist and multi instrumentalist who has performed at such prestigious venues as the Jazz Cafe, Royal Festival & Queen Elizabeth Hall. Harris has also been invited to perform at Tate Britain for Turner prize artist Chris Ofili, and supported masters Herbie Hancock, Ornette Coleman, The Roots and many more.


Adem Ilhan is an English composer, producer and singer-songwriter. He has released many albums: his solo music project released under the name Adem, in the acclaimed post-rock band Fridge, alongside Kieran Hebden, and as part of the electronic duo Silver Columns with Johnny Lynch. He has scored several feature films and television series and numerous documentaries.


Robert Stillman is a composer and multi-instrumentalist from the north east United States. His music juxtaposes the archaic with the futuristic, incorporating influences of Jazz, Minimalism, American Folk music, and experimental electronic music to create a sound described by the Guardian Observer as “lending an avant-garde shimmer to pre-modern American sounds.”